Funny country, ours is. We love to hate. We are so fed up of our own miserable problems and pathetic administration that we just need a media-created effigy to direct our hatred and burn. Beyond logic. Beyond rationale. Beyond the levels of tolerance and sophistication that one can expect from a country that boasts itself as the world’s largest democracy.

Aam Aadmi Party (AAP) leader Arvind Kejriwal humbled in the recent national elections. Just four members from his party got into parliament and Kejriwal himself lost by a mammoth 337,000 votes at Varanasi to the next PM of India, Narendra Modi. Honestly speaking, it was a stupid move by AK to challenge Modi at Varanasi. He could’ve contested from his home constituency, won his seat in parliament and actually made a difference from inside over the next 5 years. Isn’t that why he split from Anna Hazare in the first place??

The hate for AK started earlier this year when he resigned as CM of Delhi within 49 days of being voted the majority government. Yes, he betrayed the trus 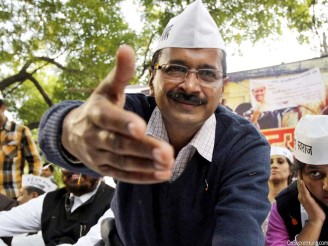 t of Delhi, and the whole country, the eyes of which were constantly upon him. The disappointment turned to hate and we coined terms like Farjiwal, Fekriwal, Bhagoda and some of our trademarked Hindi swear words which never cease to evolve every-time they’re mentioned. In more ways than not, justified.

All he asked for this week was forgiveness and another chance. He apologized to the people of Delhi, and India. He conceded his mistake and inexperience. Gave his reasoning, and came out pleading for a chance to make things right.

And what do we do?? We lambaste him on social media, accusing him of dramatics, calling him all sorts of things, talking about flogging him publicly and what not! Not to mention his supporters being called AAP-tards and baboons (which, thankfully, is not racist in India).

Nobody wanted to touch AK before the elections. He came out and blasted the most influential people in India for corruption and money laundering, and nobody had the balls to do anything more than denying and reverse accusing him on the news. But now that BJP has swept off the elections, Nitin Gadkari comes along and files a defamation suit. Amazing things power does to people. [Correction: The case was filed a few months ago. Yet, of all the crimes people can commit, we see sense in filing a case for calling someone ‘corrupt’.]

Kejriwal, sent to judicial custody, refused to pay the bail/bond amount of Rs. 10,000 and said that he’d defend himself in court. Why do we accuse him of being above the law? Any defendant has the right to not pay the bail money. It’s an option, not a law. And he said he’d defend his stand in his court hearing. He’s not answerable to the pedestrian unappreciative masses on social media. Wake up and see sense, people. Hating him won’t get you anything.

Back in 2011, he went to jail for similar charges. Back then, he was just an activist, not a political leader. It was easy to pick on him. He didn’t pay the bail even then. He was seen as a hero back then. Why wasn’t that perceived as above the law? Our very own national hero, Mahatma Gandhi, was sent to jail by the British. He was offered bail for as little as 1 Rupee, but, he still declined.

We reelect criminals to parliament. People with blatant corruption charges, people who have more black money than most people earn legitimately their whole life, rapists, uneducated, worthless ministers. Everyone is forgiven and voted back to parliament.

Why not Arvind Kejriwal? A clean record, a degree from India’s premiere technology institute and so many more qualifications that could bring the more than half of the current parliament to shame… and most of all, clean intentions a good heart.

I don’t expect this article to be received well by most of you. I’m probably just another AAP-tard baboon on your timelines. Your hate for Congress and AAP has blinded you too much to read or hear anything against anyone remotely related to BJP, let alone trying to look at it objectively.

But, to those who see sense like me, I hope you’re in Delhi. Give him another chance. He’s a good man.