I had the honor of attending a US Naturalization Ceremony today. It’s an event where immigrants who have gone through the system are officially granted citizenship… the proverbial end of the long winding road.

The event happened at Faneuil Hall (Fannie Hall) in Boston, in a hall quite similar to the Ellis Island Immigration Hall in New York harbor. The immigrants are seated in the main floor area, which has a dais and a row of desks in front of it. Guests sit in balcony seats looking down upon their friends and family on their special day.

The first step is called a check-in. The immigrants line up and walk over to the desks upfront. Men, women, and children of all colors, shapes, ages, and sizes, representing countries from every corner of the globe… each of them coming from their own unique walks of life but ending up on the same road, inside this hall.

They now have to verify some documents, have one last look at their green cards before submitting them in, and in return, are given another document along with a handheld-sized US flag. As they stand in line you see a mix of excitement and nerves. For some, this is the end of a tiresome journey towards the promise of life, liberty, and the pursuit of happiness. But as they stand but a few feet from it, I wonder if some of them stutter in their next step at the thought of renouncing their home country’s citizenship, something that has defined a major part of their identity through this very immigration process.

They pick up the flag and turn around to walk up the center aisle back to their seats. And the raw emotion at that moment is there for all to see. Pride, joy, relief, euphoria, almost every emotion you can associate with success and accomplishment. They look up at their family/friends in the balcony and wave the flag like a trophy, with a big smile on their faces. I even noticed a balding, upper-middle-aged man with furrowed brows and a stern, labored expression standing in line. After submitting his papers and picking up his flag, he turned around and look down upon it. He too stared at it for a couple of seconds and broke into half a humble smile as he continued his walk back. It was a look of a tired man who was probably thinking to himself, “wow, I made it!”

The rest of the event was fairly ceremonial. A US district court judge arrived and sat on the dais. The representative of the USCIS proposed a motion to grant the immigrants citizenship under recommendation from the USCIS and Department of Homeland Security, and the judge subsequently granted the motion. This was followed by the judge presiding over the en-masse taking of The Oath of Allegiance, at which point each of those immigrants officially became a Citizen of The United States. 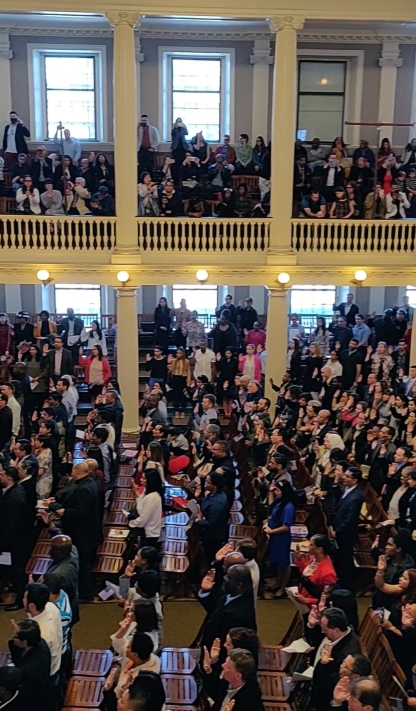 Before leaving the hall, the judge spoke to the audience. She gave a poignant speech about what it means to be an American… a naturalized immigrant in a nation of immigrants. She spoke about their rights, privileges, and responsibilities, and their duty to the world to always represent America as the symbol of hope and freedom for everyone, everywhere. She even named the 72 countries from across the planet that had contributed their own colors to America’s rainbow of diversity in that hour. She then presided over an en-masse recital of the Pledge of Allegiance.

While I had heard that these ceremonies were an interesting but quiet affair, the thing that stood out the most was the humanity of it all. As the newly anointed American citizens walked out of the hall with brand new certificates of citizenship, you could see what being an American meant to many of them. Tears of joy streamed down the faces of two women, a daughter who was able to bring her burqa-clad mother into the country, possibly from an oppressive war-torn one. An African (now African American) couple who were with their interpreter, expressing their happiness, an Indian man and his wife who had probably started their journey more than 15 years ago… and many more people probably feeling for the first time in their lives, what it truly means to be free.

Today, for the first time in my 6 years in this country, I watched America being America. And it was a beautiful thing to have experienced.